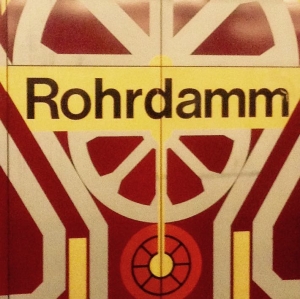 Three schoolgirls, skirted & shirted, each with a small rucksack across their white cottoned back, play a neat dance game in the carriage on the 7 u-bahn. They spin & clap the upturned soles of their smart shoes together, spin & slap palms. A pleated chorus of words & laughter accompanies the frenetic routine and the motion of the train is subsumed into the dance. The dark glass reflects. Occasionally, the laughter or the words or the movement of the trio, will draw momentary glances from other commuters. The world beyond the window suddenly bursts with colour; a blur of crimson & cream rapidly slows to become Rohrdamm station.

Sat, with one corduroy leg hooked over the other, a man with a long, ashen face & dark-blue eyelids, thumbs the pages of a book, first one way, then the other, beneath his black nostrils. He breathes in deeply, exhales, opens his eyes, looks around briefly, exchanges this leg for that, closes his eyes again & repeats the process.

At Bismarckstrasse, a woman steps from the platform onto the train. She glances up & down the carriage with a look of cool disdain. I assume that she is searching out a seat, but a young man close to her offers his by raising his thick eyebrows. She looks down at him, declines the offer (also with an eyebrow movement) and produces a paper napkin from her sleeve. As the train begins to move, she unfolds the napkin, places it carefully in her palm & then, with something akin to a sneer, takes hold of the strap swinging above her elegantly bobbed head. 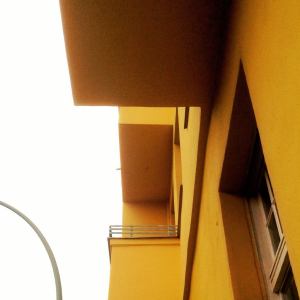 Johanniterstrasse 8 is quiet but for the unseen, happy little birds in the trees & the occasional low rumble of the s-Bahn passing over Merringdamm. It is a warm evening & I have the window open. The vast voile curtain ghosts the pastel brown flats opposite, allows the aromas of Kreuzberg and deters bugs. I am drinking a Berliner Pilsner that I have chilled in the filled bathroom basin. What are the aromas of Kreuzberg? I want to say, straight off the cuff, oranges & copper. But are these truly present? They are, I suspect, latent, secondary, suggested perfumes. Kreuzberg, to my mind this hour, tastes of asphalt, almonds & alders, iron & urine, pastries & Pilsner, summer dusk…

…and then, suddenly, from one of the flats across the street, a trumpet sounds. Someone teases a slow & smiling version of Smoke On The Water from the instrument! And, this, this is the aroma of Kreuzberg this evening!